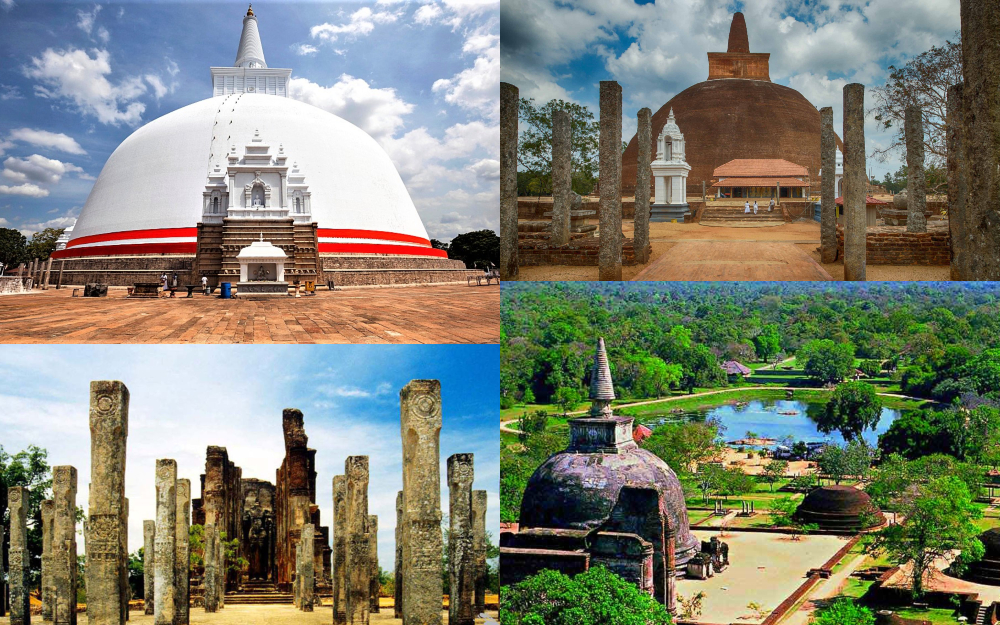 The sacred City of Anuradhapura

The largest and oldest of all ancient cities in Sri Lanka is termed as ANURADHAPURA. This city is very famous among Buddhists pilgrims. Upon this city one of the greatest civilizations of Asia and in the world was built.Therefore It was the most wealthy city which created a unique culture and a great civilization. From 4th century BC to 11th century AC it was the Capital Kingdom,during this period it remained as one of the most stable and durable centers of political power and urban life in South Asia. Sri Maha Bodhi , Ruwanwelisaya, Ruwanwelisaya, Lovamahapaya, Jetavanaramaya , Abhayagiri Dagaba, Mirisaveti Stupa, Lankarama are major tourist attractions in Anuradhapura. 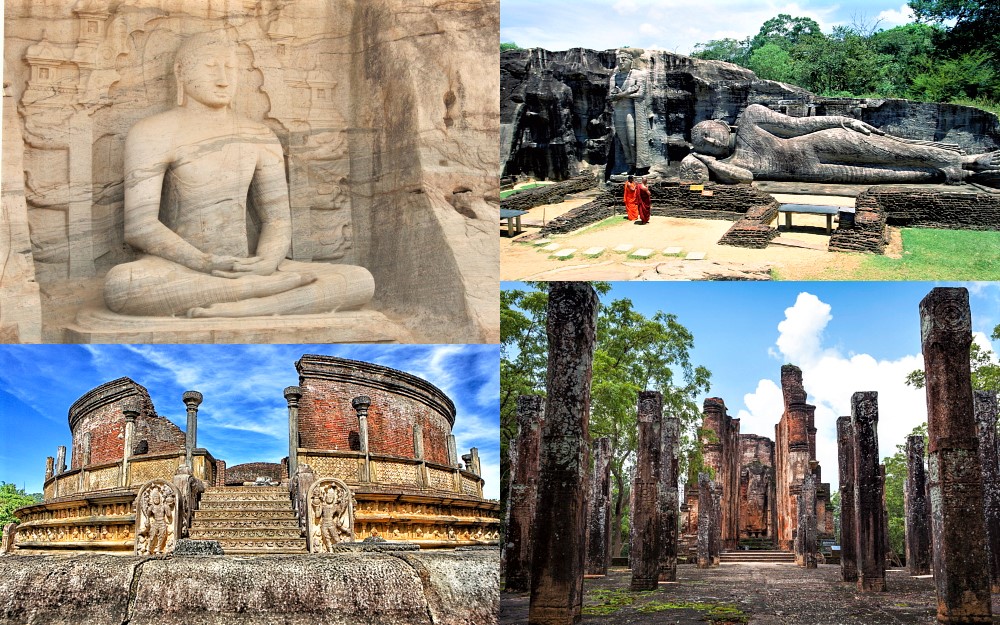 The Medieval Capital City of Polonnaruwa

After the destruction of the Anuradhapura, Polonnaruwa was the second Capital city of Sri lanka.Now It contains with brahmanic monuments built by Cholars and Monumental felicious garden city created by king first Parakramabaahu. Today the ancient city of Polonnaruwa remains one of the best planned Archeological relic sites in srilanka. The ancient city of Polonnaruwa has been declared as a world heritage site by UNESCO (United Nations Educational, Scientific and Cultural Organization).the lankathilaka and colossal status of Bhuddah made from Stone are situated here. Also Shiva Dewale, a hindu temple that was built during the 13th century,one of the famous attractions in Polonnaruwa. during the short Chola reign The city Polonnaruwa was also called as Jananathamangalam. 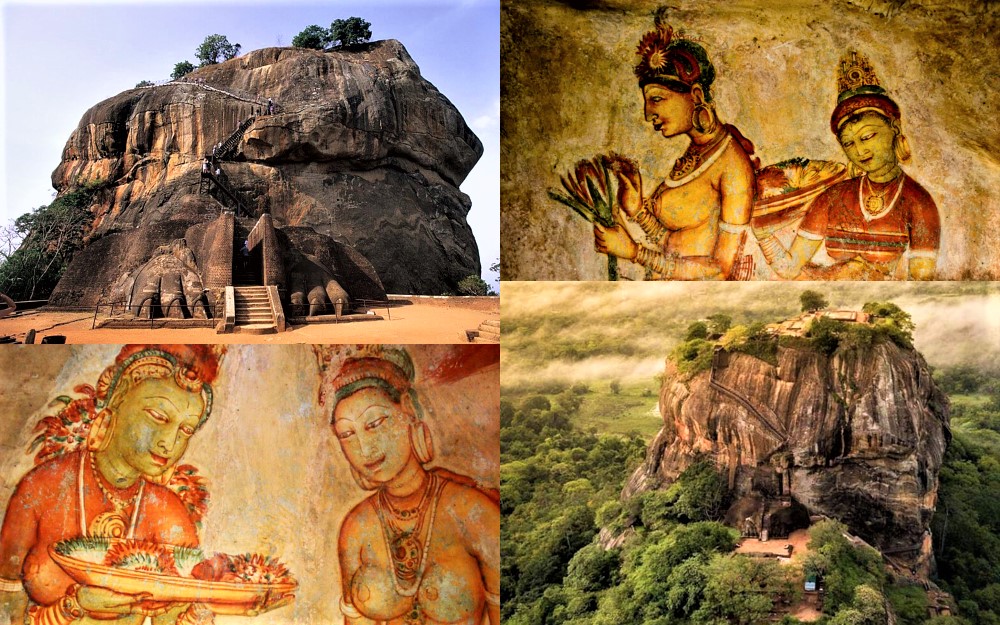 Sigiriya , the Lion's Rock is a rock fortress and a palace located in the Matale district of Sri Lanka.this fortress was designed by kind kashyapa who killed his own father king dhaathuseena. Sigiriya is one cornerstone of Sri Lanka’s cultural triangle, the others Anuradhapura ,Polonnaruwa. The Sigiriya rock itself rises 370 m (1,214 ft) above the sea level . The Gardens of the Sigiriya city is one of the most important aspects of the site as it is among the oldest landscaped gardens in the world. These gardens, arts and architecture, engineering and hydraulic technologies was built duing Anuradhapura period it means AD 477-AD 495 .when talking about sigiriya, Frescos are cannot be forgotted. The ladies depicted in the paintings have been identified as Apsaras. 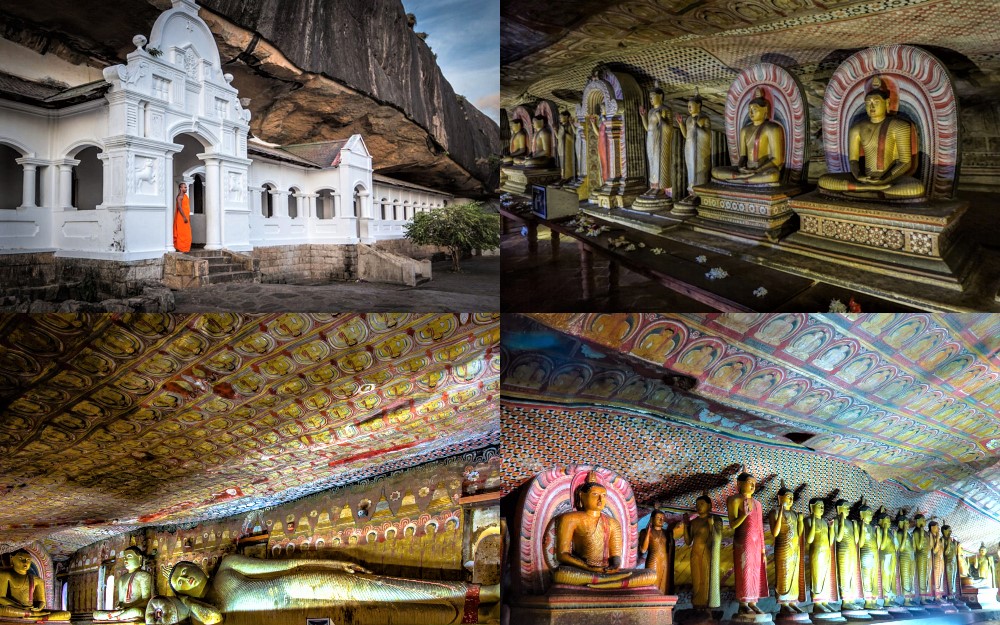 The Rock temple of Dambulla

Sri Lanka has many cave temples but Dambulla Cave Temple is the most venerated, celebrated and most probably the most visited. The temple contains Buddha statues and paintings which are considered as few of the Sri Lanka's most important and evocative religious arts. The museum exhibits ancient paintings including Rock Art dating to the pre-historic era up to 20th Century A.D. It is located close to Dambulla Rajamahaviharaya, which has the largest collection of wall paintings in Sri Lanka. Inside the caves, the ceilings are painted with intricate patterns of religious images following the contours of the rock. There are images of the Lord Buddha and bodhisattvas, as well as various gods and goddesses. The Dambulla cave monastery is still functional and remains the best-preserved ancient edifice in Sri Lanka. UNESCO maid their involvement by commencing a joined project of reconstructing the monument during 1982-1996 in collaboration with Dambulla Temple Authorities More recent inspections by UNESCO in 2003 have proposed an expansion to the existing protected zone around the complex in order to minimize damage to surrounding archaeological features. 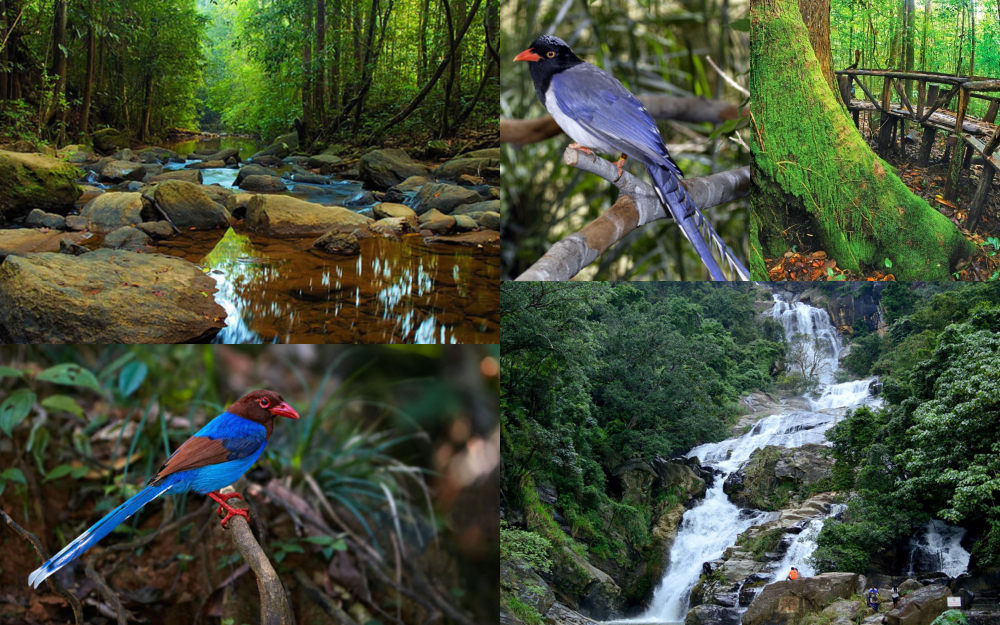 Sinharaja rain forest is a unesco listed world heritage site. And sinharaja remains as one of the least disturbed and biologically unique lowland rain forests remaining in sri lanka. Biodiversity of sinharaja is very high and a large propotion of the flora in sinharaja is endemic to the country. Sinharaja is arguably the most important biodiversity site in sri lanka and is also internationally important for tropical biodiversity. Out of 12 endemic mammal species of the country 8 are found in sinharaja. Elephants, leopards, wild pig are the large mammals that has being sighted. Squirrels & monkeys are frequently seen. • sinharaja hosts a variety of birds. With over 147 species have been recorded. Ceylon hanging parrot, ceylon grey hornbill, ceylon wood pigeon are the few endemic species.